Finished the dress, submitted the entry (after a few false starts with the online process!) and then had a fabulous afternoon's walk on a lovely sunny day. 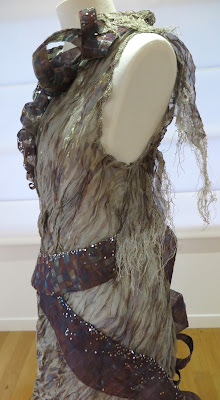 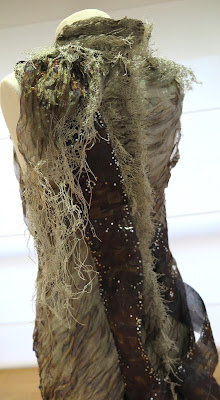 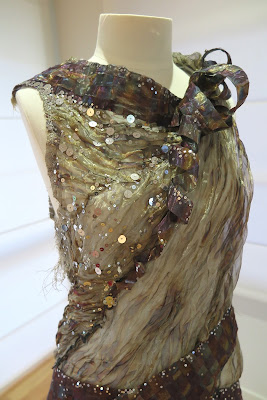 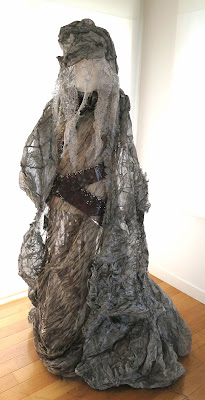 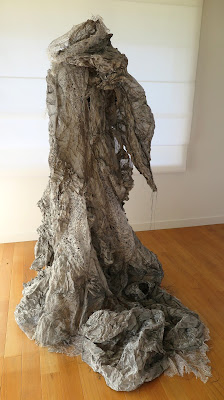 Fingers crossed from everyone please!
Whatever happens, I am going to create a photographic and video installation with the piece in cooperation with Mandi a fabulous photographer.

Posted by Alysn Midgelow-Marsden at 08:04 2 comments: Links to this post

It has been heads down and stitching for the last couple of weeks as the deadline for the Wearable Art Entry approaches. I have one more day of stitching, and that will be that! My finger ends will be grateful, I have calloused and numb finger ends, not helped by the 'blunt' end of the needle digging in at regular intervals.
Progress so far:
I spent a fair while arranging and rearranging the woven strips around the dress. Lots of pinning, standing back, unpinning and starting again. It never is quite the same in real life as the concept drawings, so making it work with what I have to hand is the key thing here.

I had intended to add sleeves and have the weaving twisting down the arms, but think that this and the cloak is too much, so am leaving them out.

I finally liked the back with a tangled bustle draping down.


It needed something to take the starkness away and I had been playing with styles of stitch patterns and types of threads on soluble. At one stage this was incredibly frustrating as no matter what tricks I tried the thread was breaking every few inches. We have all been there, but the thought of hours and hours on the machine re-threading every minute or two was not a good one! In the end, by chance it was the Auckland Stitches show and I dragged Brian along to see what it was like. I have to say that within half an hour we had seen it all, and sorry to say not been inspired at all, which is a great shame. However, the silver lining (literally in this case) was that I knew I was low on silver metallic thread, so picked up a few reels of Wonderfil and whilst I was at it new top stitch needles also. This was absolutely my saving grace - mostly the top stitch needles, but also the thread was great too and I could combine that with another thread which was a better colour but not robust enough on it's own. So that was it, two days of machining without (many) swearwords. I could have gone on in that vein for ages, but aware that I only had one week, of which I was away for 3 days, before the deadline, meant that I drew the line at whatever was made by Monday evening.


Then for the sequins - I am adding as many as I can to the weaving edges and to the front and right side. I will keep doing this tonight and some of tomorrow, then that has to be that also. It will need soaking to remove the soluble and time to dry before photographs which have to be sent to WOW.


The cloak is also almost ready:
I am aiming for the look of an open cocoon, highly textured and suggestive of some wonderful transformation inside. It has developed a period, horror sort of look which is interesting to see emerge.


When the cloak was designed I wanted to be able to obscure the face of the wearer, to do this I have added draped and embroidered net over the front of the hood which will cover the face when worn.

I have found a use for the bath! I'm a shower person, so the bath in the new house hasn't been christened till now.


The net/lace with the reflective tape stitched in just needs to have some burning away. As you know, there is always something in a piece which can benefit from the touch of a flame or a soldering iron!  This is tomorrow's job.
In amongst this last minute dash, the builder we have been talking to about transforming the barn into a studio - lining, insulating, adding a clear door at the front, storage cupboards at the back and blocking Brian's remaining workspace/garage off, told us last Saturday night that he was starting on Monday, and could we move all of the boxes/furniture/art materials etc. out so that he could get on!!!! He is actually a lovely man and is doing a fabulous job - but the timing wasn't perfect.
But in another week I will have a space ready to paint, add electrics, water, a toilet and what a treat it will be to have a permanent space to settle into for creating work and maybe running classes.

By this time next week they will have insulated the roof and made the front door/wall and I can move the boxes around yet again. Maybe this time will be the last for a while?

Posted by Alysn Midgelow-Marsden at 07:16 No comments: Links to this post