I have been cogitating for a few weeks about what to do for my '100 day project' - and finally this morning on the dog walk, it all came together - decision made, project uploaded  - done!
I now have a while to get some research done into my ideas so that I hit the ground running on day 1, June 7th.
To find out more about the project and follow the progress of the participants, see the website.

Isn't it just such a fabulous feeling when you just know something is the right choice?
I am now really looking forward to getting started and ideally some of the diary days will turn into finished pieces later. Even if they don't, the journey will take me somewhere.

Remember the words of Ernest Heminway:


“It is good to have an end to journey toward; but it is the journey that matters, in the end.” 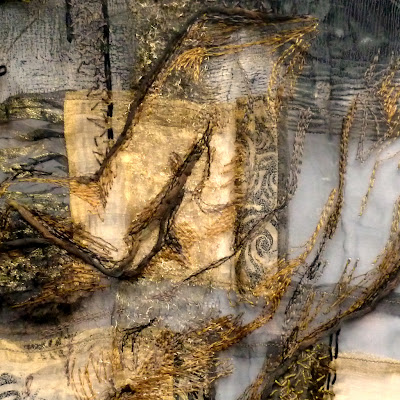 A weekend of discovery


What a fabulous weekend for soaking in atmosphere and creativity, artists, galleries and artistic spaces.  I am seeing so much work and discovering so many new places that I almost don’t know where to turn!

Friday was a day for doing the rounds of a few venues I have been meaning to get to.
Firstly, Ponsonby, a lovely turn of the century suburb with interesting shopping and plenty of preserved old villas. It is now the home of an alternative culture and is more individual and creative in feel than the city CBD. It is home to a couple of great art spaces, one, Objectspace, is a gallery I have been aiming to visit.
The current exhibition is work by Jo Torr. Jo describes herself as a sculptor, and though I don’t know the rest of her work, this selection (called  ‘Islanders’ ) from a series of collections created between 2001 and 2013 on similar themes is worked in textiles.   The work is based around exploring the history of the connections and encounters of European and Polynesian peoples, both in New Zealand and in the Polynesian islands. She has done this by combining the textile materials and designs from the cultures in seemingly simple yet obviously deeply thoughtful ways. They were a joy to be amongst and I hope to be able to get to the gallery to hear her speak next week.


An unexpected discovery as I drove away from Ponsonby was an art materials shop, studio art run by artists for artists, a treasure trove of goodies – paints, canvases, gel mediums, digital grounds  - I will be back there soon enough!

Back over the bridge,  I wanted to get to the Depot in Devonport . This is an arts space which is also for the encouragement of artists and makers, it has a programme of development courses and lectures which are aimed at the makers, helping them in their practice and with business skills. This is incredibly valuable as an offering. Of the work on display, I loved the paintings of Dean Buchanan.

The scenery is recognisably that of New Zealand, though with a Japanese style in composition. The fabulous aerial views of waterfalls and the islands are bright, bold and dramatic. Next time I have some money to spend ...
The paintings show something of what I am starting to see as a ‘style’ in New Zealand. Not that Deans’ work is in any respect generic, they are absolutely ‘his’ and listening to an interview he gave for the culturalicons project, they fully express who and what he is. During this interview he talks both eloquently and in a really understandable, down to earth manner about his work.
I came away remembering one in particular, which is that to succeed and develop you must approach your work with a will. In other words, not hoping it will happen, not being uncaring of the outcome, but that you have to really get in there and get down and dirty with it, concentrate and work at the pieces.

Continuing this busy artistic weekend, on Saturday there was the opening of a new set of exhibitions at Northart. This is anothern impressive art space, in Northcote and hopefully one which I will be more involved with in the future. I have joined and offered to volunteer. The only down side to the open evening was the lack of someone greeting visitors, so I came away with no idea of who was who, either curators or artists. Of the exhibitions, the ones I felt most connected with were Jacqueline Aust’s etching on waxed papers and Frances Rood’s cut paper assemblages.
Jacqueline pieces were collectively called ‘Enshrined’ and are abstract explorations of the ways in which we acknowledge and preserve our feelings, objects and ideas. They are also beautiful in their own right.

Frances’s pieces are also about the inner world, but the physical inner world. The pieces are composed of layers of cut papers, each are structural forms and networks from our anatomy, slices through the body or cells. The pieces build to become a complex play of shadow and light referencing the depth, connectedness yet fragility of our bodies. The series is called 'Transposition', but sorry, no images I can find for you to see.

I had not yet had a chance to visit the village of Muriwai on the west coast of the north island. It is only 38km’s away from us, and we are on the coast on the east side, which gives an indication of just how narrow this part of New Zealand is. Being on the west coast, the feel is very different, it is much less built up and, unlike our very sheltered bays, the west coast catches all of the weather, it is popularly known as the ‘wild west’ as it is where the mad surfers go for kicks.

So we took the excuse of the Muriwai Open Studio Trail weekend to pop over. The trail is not the most extensive I have ever been to, with eight venues plus the main exhibition, which was just as well because our time was limited that day by other commitments.Whatever the number of venues, I love trails like this, getting to see the artists in their own environments, spending time to give you a real feel for what they do.
We started at the exhibition in the fantastic surf club and community centre. This is a new building and (unusually for New Zealand), the architecture, construction and positioning of the club fitted the usage and environment perfectly.

As is always the case, some work was more to my taste than others, some of my favourites were:
Alan Ashworth (photography)
Alan’s work was evocative and expressive, atmospheric full of ‘Muriwai mood’.

Ross Land (photography). These images were interesting with offset colour edges creating a clever artifice reminiscent of hand coloured prints. The hand colouring of images seems to be making a comeback and can be a useful device to direct your attention into the message of the piece.

Maree Wilson (paintings)
Maree says of her work that it ‘evokes water, atmospheric disturbance and erosion’.
Holes are gouged and drilled through smooth polished layers of ground and subtle washes of paint, disrupting the painted surface and moving the works from abstracted landscapes to self-reflexive studies of surface and the process of making. Once again, atmospheric and moody, and very well made pieces.

Joss Hong (jewellery)
Having studied jewellery techniques with Helen Domleo at the Beetroot Tree , Brian was particularly attracted to these pieces. Joss includes casting, texturing using a rolling  mill, folding techniques and resin forms in her designs. It was interesting to note that more than one of the studio hosts and organisers were wearing her pieces.

Andrew Hughes (sculpture)
These were another favourite of Brian’s. Andrew has taken tree fern trunks and carved through the surface. Clearly showing the textures and forms which the trunks have as a natural structure and adding sympathetic, organic carved forms through the layers of the trunks. The dark, monochrome of the ‘wood’ serves to emphasise the textures, needing no additional colour or decoration.

Jacqueline Cockrill (paintings)
As should be the case, the artist statement given by Jacqueline is much more eloquent and evocative than any words I can give you, this is what she says:
‘Works exhibit both bold and subtle qualities. From a distance lines and broad areas of strong colour bring structure to the works but look closer and you find rich textures incorporating vibrant colours and markings that continue to engage. My work has been influenced by an increasing fascination with the organic marking of time passing. Weathered surfaces, patination and the scars of history. Texture, layers, cuts and scratches bear testimony to the works painstaking evolution. The process of applying and scraping away pigment produce marks that cannot be completely erased. They remain as painted traces and textures revealing what lies beneath – recording what has gone before.’

The three cottages tucked into the hillside above the beach which had been those of the three Perrin sisters were probably the most atmospheric of the open studios. They reminded me of the Welsh cottages I know well. The sisters were all artistic in different ways including print, ceramic and jewellery, and have all left stacks of work which is being sorted and documented over time. The cottages are now used as artist’s retreats.


Pat Henley has been a textile painter and had a selection of scarves and wraps to show, but is now concentrating on creating paintings about her environment. The immediacy and flow of the liquid acrylic and wash techniques are those she feels best express her ‘wild, restless, ever-changing’ home. The habitat of gannets, wind-surfers, wave riders, excitement seekers. She takes time to watch, listen, explore, be buffeted by winds, and gaze in awe at the tumult of storms.

Pat was encouraging visitors have a go with her wash and ink techniques and both of my girls spent a great hour exploring the possibilities of the media. I am not entirely sure they were supposed to do a whole picture each and use as much of the beautiful high pigment inks as they did. Having said that, I was really pleased that my 18 year old insisted on having a go after watching her younger sister manipulating the ink and water as ‘she’d had an idea’ and which she says she wants framing and putting on the wall, quite a result it think!

Engaging repeatedly with a subject is important, and listening to Pat reminded me of this.
Less chopping and changing, more focus and attention onto my subjects.