New Zealand beaches on their way to Nottingham

The pieces for the Living Threads Exhibition at Trent College, Long Eaton (starting 3 April) are now in the post and the lap of the gods, but in case you will not be able to get to that exhibition, the promised sneak preview is here:


Sorry about the crinkled background, it was a rush job and raining outside, so no chance to get perfect images, but I hope that you get the idea.

A quick update today.
I am making five pieces based on local beaches which will be sent to the Living Threads Group Exhibition at Trent College, Long Eation, Derbyshire and then to the Beetroot Tree.
The long hard descision making and developing part is over. I have been working with a mixture of original images transfered to fabric and textures from the scenes, then a geometric collage to form  semi-abstract panels with the feeling of the space, rather than a simple rendition of the views.
They are now assembled and ready for the finishing stitches and 'embellishments'. The finishing stitching etc. is the most relaxing part and really makes completes the pieces. For this I intend to use simple, repetitive hand stitches such as seeding, running, herringbone and blanket stitches, I am not sure whether to add beads yet, though I have some gorgeous handmade recycled glass beads from Maggi Relph at the African Fabric shop which might just be right.
They are very different to recent works, possibly an abberation or sideways step whilst I settle in and continue to take great daily pleasure in being at the coast, but I hope that you like them.

Just 3 days before the pieces have go in the post, so better get back to the needle and threads now.
Posted by Alysn Midgelow-Marsden at 19:17 1 comment:

Deadlines, deadlines!
Now my parents have left and the container’s contents have been unceremoniously dumped into the garage, I have to get to work in earnest.
The deadline for my contributions to the Living Threads exhibition is the end of the week, but is it still full on sunshine all day everyday and the beach is so close – sorry to go on about it, but having lived through last ‘summer’ in the UK, it is a continual treat to get up to blue skies and sunshine pretty much every day. It won’t last I know, but while it does it can be hard to sit in a cool room and stitch. Perhaps I have to find a technique which will allow me to sit in the open air? More hand stitching maybe? And should the work I make be dictated by the weather and where I want to sit rather than creative development? Probably not really, so back inside to the sewing machine it is!

The pieces are coming on. I decided that as they were going to the UK, that they should be about the landscape in my new home. One of my last bodies of work was based on the bare winter landscapes of southern Derbyshire. These new pieces will reflect my adoration of the sea.
Here are a selection of images which I am using as starting points for the work.
Piece 1: Omaha Beach daytime 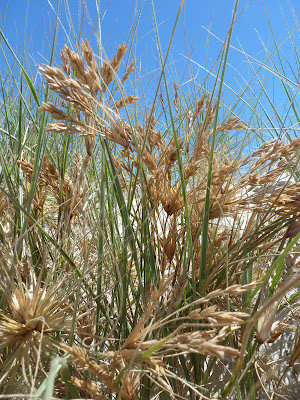 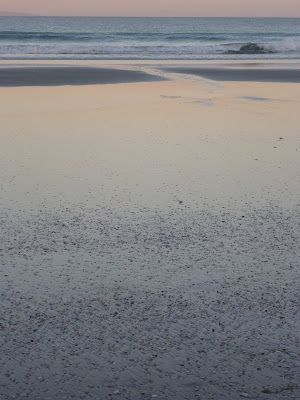 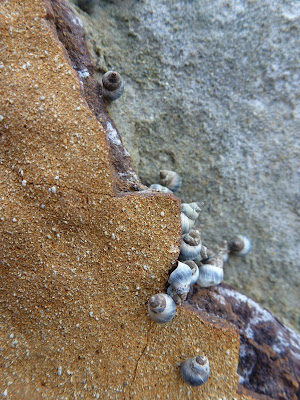 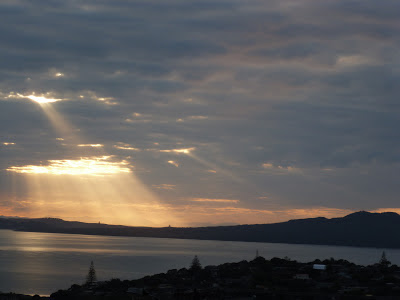 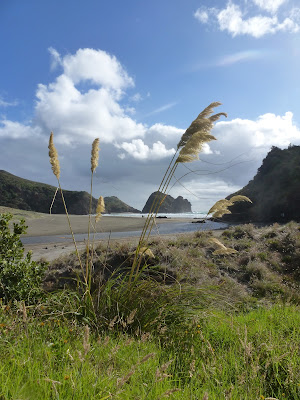 Having started scuba diving at the age of 16, I decided to study Marine Biology and so spent my degree years by the coast in Bangor, North Wales.  Ever since then I have loved the feeling of being by the seashore in any and all weathers. Something about the openness, the sounds, smells and the changing nature of the seascape is relaxing. Does anyone else feel that way about a type of environment?

As usual, making almost any work for me involves burning something. In the case of these pieces it was deliberate and under control when I set to and melted plenty of nylon organza to make it bubble and texture. Remember if you are going to melt any manmade fabrics over an open flame that you need to be in a well ventilated area because not only does it smell pretty bad, but it also gives off noxious fumes which you don’t want to be breathing in.

The pieces are still in development and will change considerably yet, but so far:


I paid a return visit to Helensville (the town with the great antique shop), to meet an ex-UK textile artist who has well and truly established herself here in NZ. Jo Dixey trained at the Royal School of Needlework, it turns out that we have a mutual friend in textile collector and writer John Gillow, (they do say that in New Zealand the traditional six points of separation become two, and here we are at one point from across the globe! and we had a lovely chat about our lives and reasons for being in New Zealand. I came away feeling that I had gained a new friend and hope to be working with Jo and keeping in touch.See her blog here

I popped over to the Auckland Patchwork and Quilters to hear their March speaker last weekend. What a great idea to end a meeting with a lighthearted thought for the month. And only in New Zealand would you hear this read out by the Guild President at a meeting of a couple of hundred patchwork and quilters ...

Renault and Ford have joined forces to create the perfect small car for women. 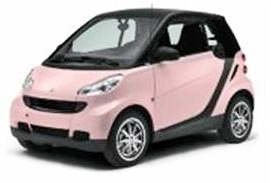 Mixing the Renault 'Clio' and the Ford 'Taurus' they have designed the 'Clitaurus'. It comes in pink, and the average male car thief won't be able to find it - let alone turn it on - even if someone tells him where it is and how to do it.
Rumor has it though, that it leaks transmission fluid once a month, and can be a real bitch to start in the morning!    Some have reported that on cold winter mornings, when you really need it, you can't get it to turn over.
New models are initially fun to own, but very costly to maintain, and horribly expensive to get rid of. Used models may initially appear to have curb appeal and a low price, but eventually have an increased appetite for fuel, and the curb weight typically increases with age. Manufacturers are baffled as to how the size of the trunk increases, but say that the paint may just make it LOOK bigger.
Please note that this model is not expected to reach collector status. Most owners find it is best to lease one, and replace when it becomes troublesome.

Now if parting shots like that are given every month, it might be a reason to join the group! I look forward to giving a talk to the group at their April meeting.
Posted by Alysn Midgelow-Marsden at 00:50 No comments: