Does anyone else find that when you have been concentrating on one thing for an extended period, that it takes a while to re-focus and get started on the next?

I am in the haitus period between projects, having pretty much finished the creative part of the work on the book for Search Press and now building my ideas for an exhibition I am involved in during November/December.
I have to take things steady for a few weeks anyway having damaged a ligament in my thumb which is making hand stitch slow. As a positive outcome, it was timed perfectly to fit in this gap between projects and at a time when I need to draw, sketch, make notes and cogitate, none of which will be a problem. And, I can't do the washing up, so that has to be a bonus!


At times like this I find that I need to take some time 'off' - for a couple of reasons. In very pragmatic terms, there is always paperwork and other 'stuff' which I neglect when I have a major project because I would much rather be making than doing the peripherals (however necessary), and surely I am not alone in that! But also, though you have been concentrating on one set of work there are always glimpses and teases of ideas for the projects you have coming through which begin to nuzzle into your mind and these need time now to float to the surface and to be examined in the cold light of day to decide which are possibilities for the next work, and which need parking again for later. So time between projects allows me to let go of the last set of ideas and gradually change focus towards the next.

I know that popular culture suggests that females multi-task all of the time, and I do find that though I love being lost in the 'making', to do creative work effectively I need a mixture of demands on my time. Perhaps some paperwork, or an article or even the accounts :( balancing out more concentrated time in the studio. If  I only have studio work to do, I am very slow and find it harder to concentrate. The power of limited time in any one 'sitting' seems to allow me to focus more effectively. Is this a habit born out of necessity or normal for us all?

Unfortunately the sun has disappeared and the rain is back with us, which means that there is no excuse to pick up a book and sit relaxing in the sun, or garden, or any of the other diversionary activities I am so good at. Which leads me to the conclusion that my goal now is to finish my accounts and other odd bits of paperwork today and get focussed on the fun stuff ...

An exhibition of contemporary crafts at Christmas. Rufford Craft Centre, 18th Nov - 31st Dec 2012
A sumptuous crafts exhibition to dazzle and amaze this festive season. A visual showcase of British designer-makers with an abundance of everything from Ceramics to Textiles, Glass to Jewellery, and all handmade.
All artists invited to exhibit in “All That Glimmers…” are part of either the Hallam members of the Society of Designer Craftsmen or The Contemporary Crafts Network.
The perfect chance to fall in love with an original piece of artwork, unique home accessory or item of jewellery. Why not treat your loved ones, friends and family… or even yourself?

It is almost with relief that I am able to get time to be writing about the last month or so.
Relief - because I have at last completed all of the projects for the book which I have been working on since the end of January. I have been exploring more complex (or twisted?) ideas for using metal with textiles and other media. The main difficulty is that each time I get started on a set of media, there have been so many ideas that I have found it hard to concentrate on one at a time. I am sure you understand that feeling.
'Almost relief' because I now have the less joyful, but critical, stage of writing up the projects, checking suppliers and material lists and ensuring I have all of the step-by-step stages. I also want to include examples of other options and finished pieces starting from the same design point or from the same group of materials.
A sneak preview of a few of the trial pieces and experiments I have been making: 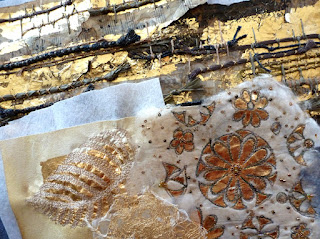 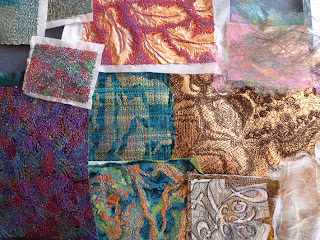 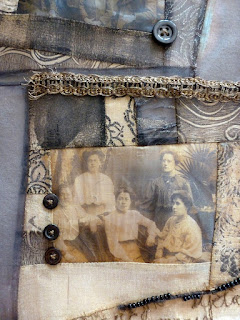 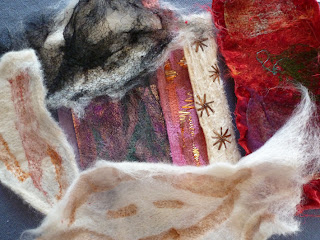 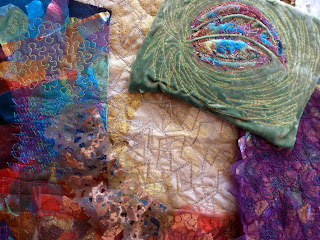 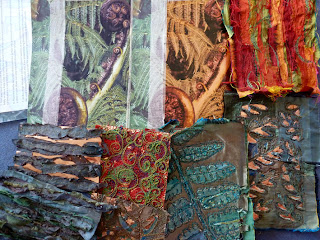 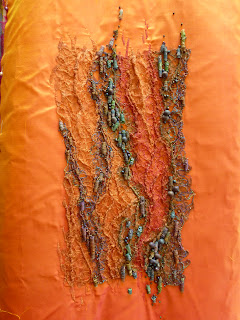 In between times, I have been visiting Northumberland, to the Twyne Textile group and the Borders Textile Group (lovely people, not so lovely weather). It is always a pleasure to meet old friends and make new ones, especially when there are those 'six points of separation' types of connections springing up during conversation. I have to thank Gill and her husband at Fenham Farm B & B for being such good company and for sharing their fabulous, modern, comfortable accomodation. I would have been in sight of Lindisfarne if the weather had let up at all, so a dramatic location to stay if you are ever near to Berwick.
Thanks also to the members of Chesterfield Embroiderer' Guild for listening to me speaking about 'Improvisation' as a design tool, I hope it gave food for thought.

I developed a new talk about metals in textile art for the West Midlands Region of the Embroiderers Guild. The meeting was held just outside of Shrewsbury on 23rd June. It was an early start with a new recruit for the sales table, my jewellery teacher, Helen, was foolish enough to offer to help with unloading the car, setting up, selling art materials and repacking the car. Thank you Helen -you were a star. Again it was a day for renewing aquaintances and new connections made which I look forward to following up.
As the speaker at Regional Days, it is often a part of the day to judge the competition. The competition was very well supported, the theme 'Our Industrial Heritage' gave entrants a wide range of interpretations. It turns out that the West Midlands has a longer, distingiushed and continuing industrial base than I was aware of. It was useful to have the regional chair on hand to explain the many industries, sites and links that were brought out in the pieces. As ever, not everyone can be a winner, but the judging panel were very appreciative of the skill, ingenuity, time and effort which all entrants had put in.

At the Beetroot Tree we hung the new exhibtion 'Retro'  and held a 'Pims and Pamper' evening with talks by 2 artists, hand massage and of course  - Pims all around.
I can hardly believe that it is nearly at an end already.
The next exhibition features Aran Illingworth's amazing textile portraits. I'll post a link and images as soon as they are on show.

I made a trip down to the new Embroiderers' Guild HQ at Walton on Thames to have a close look at a Japanese furisode which features gilding on fabric and exquisite stitch work. I got to play at (careful) dressing up as well. 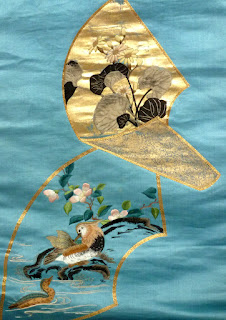 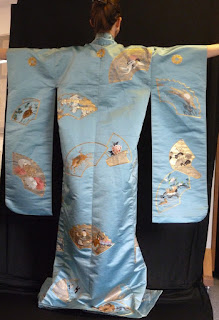 The exhibition at Nottingham Castle until Sept. 16th is called 'Living in Silk' and is a travelling exhibition from China which shows silk covering over 5000 years of use. It was absorbing and took me several hours to get around. My mother suggested that taking a magnifying glass would have helped, so bear that in mind if you are not short sighted like me! It was a little on the propoganda side, and there were no samples from the 1940's to the 1980's, or comment upon the changes that might have happened during that difficult time. The Castle Museum had also curated an associated exhibtion called 'Unravelled' from its' own collection of Chinese silk objects which really added to the visit. Go if you get chance.

From the China National Silk Museum, Hangzhou, China
Chinese Textiles Through 5000 Years
The Living in Silk exhibition begins with some of the earliest surviving fragments of silk cloth in the world, continues with sumptuous garments and accessories from the Qing and other dynasties, and culminates in the present day.
As well as giving a taste of the rich colour, symbolism and exquisite craftsmanship of Chinese silk, the exhibition also provides a glimpse in to how silk has been produced over several millennia.  It's the first time these items have been seen here in the UK!
Items are courtesy of the China National Silk Museum, Hangzhou and Zhejiang Provincial Department of Culture, China.


I did give myself a bit of time off, it was a lovely evening yesterday (which makes a change this rainy, cold 'summer'), and allowed my son Alex to talk me into going outdoor trad climbing on 'Great Corner' at Willersley Crag near Matlock in Derbyshire. I may have mentioned that I am not very good at this, and I know it, but Alex seems able to talk me into it occasionally. The problem always comes when I am about half way up and stuck  - again - but there is no going back without getting to the top first! Seeing my brother and sister in law and nephew looking up at us when I got to the top was also a little embarrasing (I hope they hadn't been watching for long), I survived with only a couple of bruises to show for it. Alex achieved a much harder climb of course ('Zombie'), but then he is a university student, so what else does he have to do with his time?! 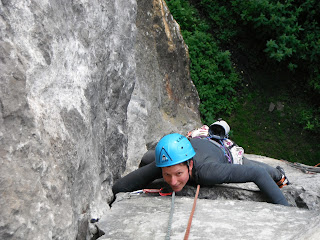 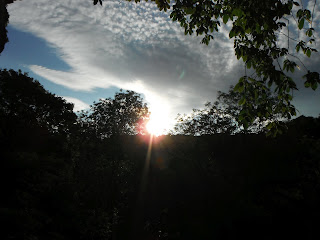