Saturday saw me scooting down the M1 and round the M25 to Bracknell to spend the day with a lovely group of contemporary quilters. Having talked to them in the morning about my work and inspirations, after lunch it was their turn to set to on metal.
Everyone had an 'Impressive Metals' pack with their materials and we embossed copper shim, coloured it with alcohol inks then cut into it and stitched it onto velvet and dyed cotton scrim. Finishing the piece with a scattering of beads.
Thanks to everyone who took part, and I hope that when you get home and have beads just the right colour and an evening to finish the pieces off, that you were all pleased with the results.
Linda Seward sent me some pictures (I have taken out most of those with me pulling strange faces to save embarassment): 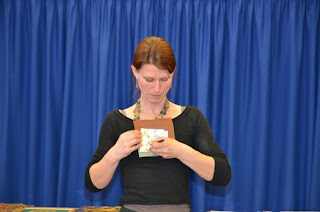 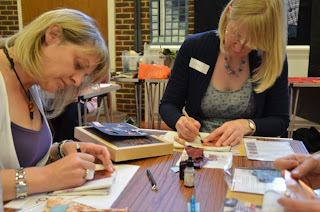 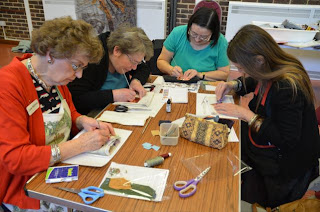 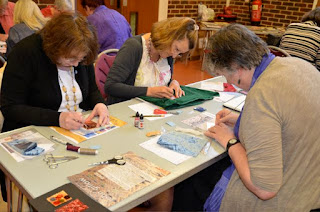 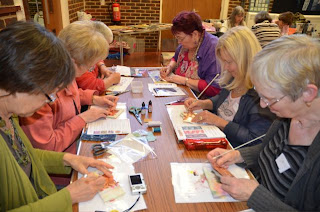 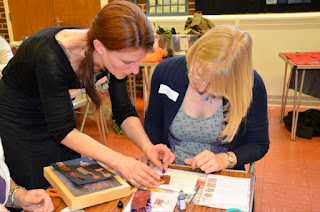 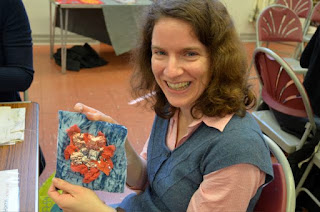 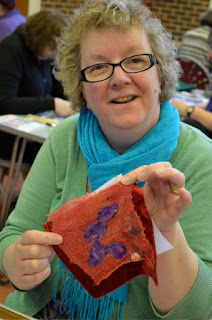 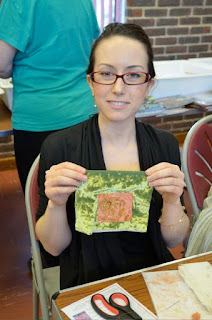 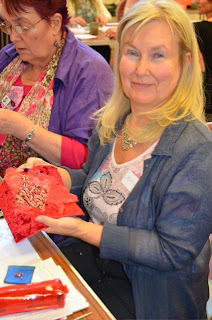 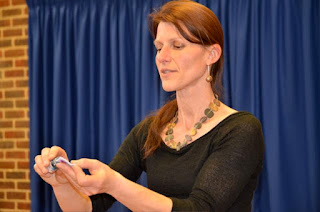 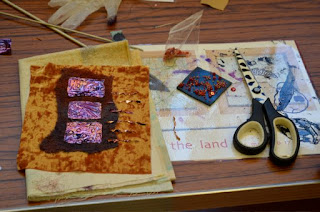 Until I can work out the slideshow link to Picasa -
here is the album of random images I would have put there ...

With all the best will in the world, I have missed lots of opportunities to post, I will blame most of that on my wanting to push on with the book chapters, it is beguiling to stay in the studio and concentrate on one thing exclusively.
At the Beetroot Tree we changed the exhibition, installing ‘4 legs good (2 legs bad, 6 legs better?), in which fauna of all sorts so long as they are a bit crazy, are on show. This will now be in place until 9th June. 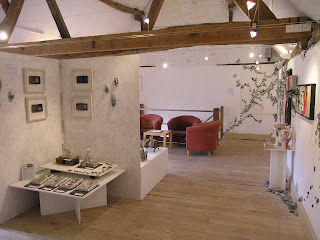 For instance, Anna Collette-Hunt spent 2 days creating her ceramic swarm of fanciful insects. Thousands of them! They fly, cluster, crawl and hide up the stairs, around the beams, between the other pieces and across the floor. Inevitably a display like this divides opinion, most are fascinated and want to take some of the swarm home to create a mini swarm in their own home, other people feel they are a little sinister.


Textiles in this exhibition are shown by Craig Fellows and Morwenna Catt.

Craig has received several industry awards, such as the Society of Dyers and Colourists Award, in recognition of his distinct and fresh use of colour, and the Leigh Cooke Colour in Design Award. With strong links with fashion, Craig has been able to work on exciting live projects with the British Leather Council, Drapers and Textile Lecture Days alongside Zandra Rhodes.
With all this already under his belt, it’s not surprising that Craig Fellows is considered 'one to watch' by VOGUE.com.


Morwenna Catt shows playful, dark, subversive crows and other animals in embroidered textiles. These remind me of Tim Burton in some ways, having a dark cartoon-like feel.

And though it is not textile, the work of Stephen Livingstone also appeals to me greatly. He creates fragile surfaces on which to work and burning iron and tin. He uses a palette of primitive colours and his theme is ‘moths’. He describes how he became interested in moths through a project linked with the British Library to develop work in response to the Lindsifarne Gospels.

Over the weekend of the 6th and 7th May, I was fully committed to making sure the Draycott Festivalof Arts and Gardens ran smoothly, and cooking so much soup and chilli that I dreamt of it later!. Each year we organise for artists and performers to take over homes, gardens and halls then invite visitors to follow a trail through the village and enjoy a creative weekend. This year, as ever, the weather was not at its best, but, also, not as bad as it has been in the past! For full details see the blog.

An interesting conundrum which arose was that of the balance between selling artists and performers at such events. We had asked a storyteller and 2 drummers to move around the various venues and stop to deliver ‘guerrilla’ stories and music because we find that if activities are planned for a set time and place, that most people don’t manage to get to it and miss out. So our thoughts were to spread them around for short bursts of performance. The feedback was interesting.

For some visitors, the drums were a favourite, for others, it was too noisy, for some the stories were great, for others, they were a little too long. And for the artists who had selling spaces, some were happy to relax for a moment, enjoy the performances, others didn’t like that they had to either be quiet (during the stories) or couldn’t speak above the noise (for the drums) and felt it affected their ability to sell.
Has anyone been to festivals or other events where performers and artists have mingled in a similar way and had thoughts about how best to make it work? I would be most interested.

As children, even almost grown up children, do, my daughter announced her need for an ‘Elizabethan Cleopatra’ outfit for her drama assessment as soon as possible. I did of course manage to add some metal onto it and so hope to include it in the next book! I can’t show you pictures of it just yet, as she won’t see it herself until next week, so look out for it further down the line.
With those and other commitments going on I have not had a chance to visit the 2 local exhibitions I want to get to, but will make an effort as soon as possible.
This week I am off to see some fantastic gilded leather wall panels at Levens Hall in the Lake District, then teaching for a group in Solihull and flying off for two weeks in New Zealand to catch up with my family, so I will have lovely pictures of lush vegetation and flowers, and wonderful scenery on my return.
Have fun.