For a little while I have been joining in with the regular jewellery classes at the Beetroot Tree with tutor Helen Domleo. She puts up with my skitting around from one technique to another and forgetting how to solder each week! Helen is an amazingly experienced jeweller having travelled widely and learnt techniques form mastercraftsmen in Indonesia (amongst other adventures). She still spends a lot of her time pushing the materials and seeing where her ideas and experiments take her, a sign of a truly creative mind, so that every week she brings samples for us to be inspired by.
At the moment I am exploring cold connections (so that I don't have to solder!), with the view that they might be useful for my textiles. I can forsee obvious problems trying to soldering metal with fabrics and threads in the vicinity at the same time!

This week I have made two sweet little chokers for my daughters using textured copper, stainless steel fabric and a rivetted construction: 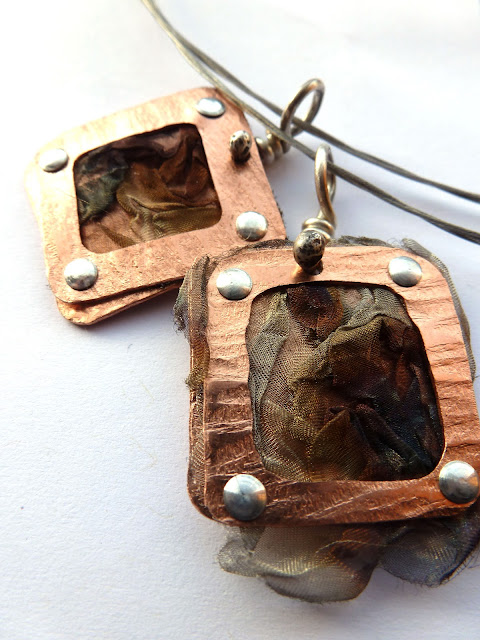 Next time we are all excited by the technique of making 'Dragon Skin'!

My main aim in these classes is just to have fun learning new techniques but some of them might translate eventually into my work also, especially as I am spending most of my studio time at the moment pushing new ideas for my next book (not due for photography until the autumn this year).
Also, I think that it is very important as a tutor myself, to regularly put myself back in the position of a participant or student as it is easy to forget how it feels to be confronted with new techniques. I hope my teaching benefits from this 'turning the tables' every now and again.
Posted by Alysn Midgelow-Marsden at 09:27 No comments:

I have just recieved a disc full of images from a workshop I ran for ArtCore a couple of weeks ago. ArtCore is a community art centre run by Ruchita and Zahir in Derby.

The workshop was focuses on a fairly new technique called cold enamelling. It uses what I presume are plastic powders which melt at 150 deg.C., so a tealight candle or an electric oven is all you need along with pliers or a clothes peg to grip the pieces as you move them from the heat. We have just started stocking the equipment and powders at the Beetroot Tree (so new they are not on the web yet -but keep checking!)

I was showing the participants a variety of techniques to get simple and quick effects with layers of enamel.
As there was only a limited materias budget I had tried a variety of base media and decided we could use CD's. When CD's are softened in warm water they cut very easily and into some pretty intricate shapes as you can see from the pictures below.
Everyone had a great time and took away hangings or jewellery for themselves and for friends. 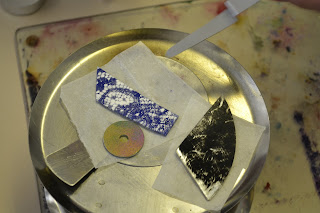 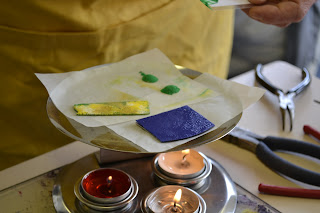 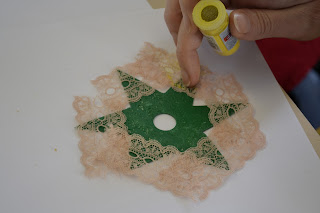 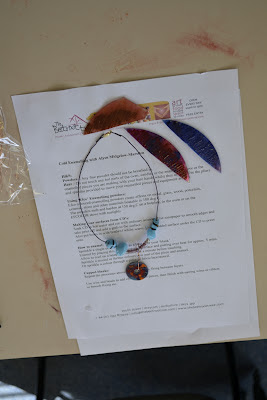 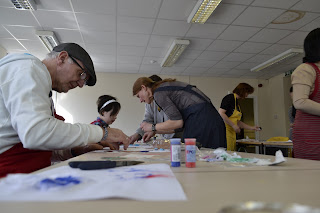 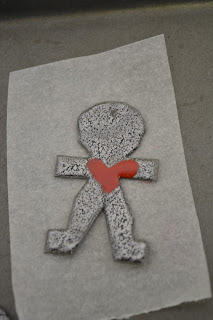 How about that for a bit of fun with possibilities for development?
Posted by Alysn Midgelow-Marsden at 16:16 No comments:

I have just returned from a few days which though were actually teaching and talking to Embroiderers' Guild Groups, I had such a lovely time that I feel that I have been on holiday! And that can't be bad.

Starting on Saturday afternoon I drove up to Appleby and was warmly welcomed for 3 nights into the home of Phillipa Turnbull who is the UK specialist in crewel work, running the Crewel Work Company. Though she had been busy that day herself teaching at the Wordsworth Centre, we had a meal, drink and told stories around the fireplace. Phillipa was also kind enough to let me know where there are some more examples of a type of gilding I am researching for the new book - great stuff!
On Mothering Sunday I helped the Appleby Branch of the Embroiderers Guild to use coccoon strippings, texture and emboss metal shim, weave with shim, wire and beads, colour the metal with alcohol inks and then combine and stitch pieces from these experiments. Hopefully I will be sent a few pictures soon from the day by members of the group, these are a couple of mine as a taster.


I had also been invited to speak to Strathendrick Embroiderers Guild near to Loch Lomond on the Tuesday, and so I had the Sunday evening and the whole of Monday in between. I used the Sunday evening to visit friends in a nearby village and was determined to use the Monday to do a good walk on the hills if the weather was kind.
Monday dawned a little less brightly than Sunday, but it was still fine and the clouds high, so I set off for a trip up Cross Fell.
I met only 2 other people in the whole trip, one was a walker whom I swapped space in the bothy at the top with, he was just leaving as I arrived, and the other was a shepherd with 2 lovely Collies moving his herd along the road as I returned to the car.

When I awoke the next day with aching hips, I worked out that I had covered 12 miles in 5 hours, over the usual peat bogs and in a freezing wind - so was quite proud of myself as it is a while since I have tackled a 'proper' walk.
It seems that I am in a phase where my determination and goal setting for personal achievements is doing well, and that has to be a good thing.

Of course, I am always keeping an eye out for interesting textures and close ups and had to stop at intervals to catch these:


A big thank you to Phillipa, Harry, Appleby Guild, Sonia, Geoff and Strathendrick Guild for having me.
Posted by Alysn Midgelow-Marsden at 15:23 No comments:

A Great Day Out

One of the highlights of the year for me is to take a trip to the Textile Society's 'Antique Textile Fair' usually held on the first weekend of March at the Armitage Centre (part of Manchester University).

This also means it is a year since I began posting as I remember mentioning my visit last year.

Sadly I was disapointed not to find a chatelaine to bring home -but it remains on my list of 'must have collectables', and some of the pleasure has to be in the waiting and searching, or so I tell myself. I was also unable to afford the fantastic, pristine Fortuny style  dress at £950.00 - though if I had the money I would have bought it there and then.
What I did find were a couple of metal items of interest:

A Sumatran ceremonial headdress. This is not old but in the traditional style. I was fascinated by the over the top, full on style and it fits well with my interest in metalwork techniques and styles: 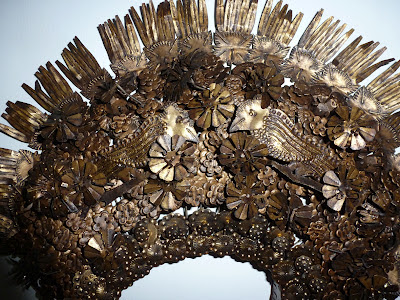 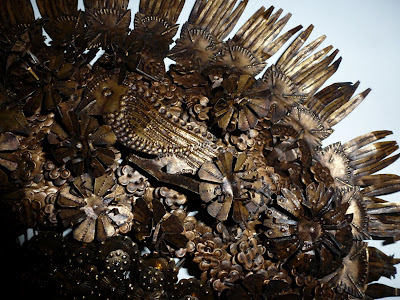 And finally, a fragment which was labelled as 'Coptic' embroidery. The piece is obviously old, handworked and the correct method, but I am a little skeptical that it is 'real' Coptic, as there were several pieces and the prices were very reasonable. If it is original it was a bargain, and if not, I love it anyway!
A lovely day out. Hope you had a good weekend too.
Posted by Alysn Midgelow-Marsden at 10:56 No comments: