I had managed to organise two days of filming with Steve Balaam from Big Ant Video and press ganged my sister and niece to be models to create a short film using the dresses/costumes I have made over the past year. We had decided on Anglesey as our location partly because I did my first degree at Bangor University and the island of Anglesey was for a while a second home. It is always a pleasure to revisit the area, I am familiar with the feel of the area and was certain that there would be suitable film sites for us. There are plenty of atmospheric location options to choose from on Anglesey, including Neolithic burial sites, early British villages, ruined medieval churches, beaches, copper mines and quarries and cliffs.

Understand, this is not big film crew stuff, this is Steve (filming and all things technical, who will also be the producer, is an artistic film genius and musician), Vida and Naomi (models and dancers) and myself as support crew, costume carrier and refreshment supervisor. The outcome however will be an amazing short film playing with the properties of the steel fabric and wire costumes.


What can you say about Welsh summer weather? About as good as the rest of the UK this summer I suspect, and that is mixed to horrid! Having said that, we were especially lucky with the weather which rained on both mornings but cleared later giving us afternoons and the long summer evenings to film in. So we danced in rock crevices, in the sea, in a bronze mine, abandoned villages and churches from noon to midnight, with lights and smoke bombs, capturing some beautiful footage. The next stage will be to add more images, layer these together with the costumes and movement from this session and to create a sound track. Not a quick job, so this will be happening in stages over months or even a year (watch this space as they say)

So, a brief taster! Just ait till you see what we can do with these!
Revisiting Angelsey this time was a great pleasure as there seems to be an uplift about the place, a modernisation of the cafes/bars/attractions which I can’t help but believe will be a great benefit to the island. We made a special effort to visit the new (ish) Oystercatcher at Rhos Neigr. This is a Huff house which includes a very stylish restaurant and bar set in the dunes at the coast (a great place to retreat between filming when the weather closed in).


Finally a big thanks to Sue and Sarah of Golden Hinde embroidery supplies for letting us use their holiday home as our base for the duration.


The Festival of Quilts at Birmingham’s NEC is always a fantastic show – if you get a chance to visit, whether you are a quilter or an artist in any medium, there is so much to see. The highlights were too many to mention.
A special mention though for Tui and her mum, Suileti whom I had asked to come to the show to celebrate the tapa cloth traditions about which they are experts. Their words say it better than I can:
'The decoration of Tongan tapa cloth is an art form in perpetual transition. Each generation adds their own innovations. This transition can be charted in the works of Sulieti Fieme’a Burrows and her daughter Tui Emma Gillies.
Sulieti’s work is rooted in the traditions of her native Tonga. Often It is a mix of symbols connected to the royal family and Christianity and imagery aimed at catching the eye of tourists, such as flowers, fish and turtles.
Tui was born and brought up in New Zealand’s biggest city, Auckland, which is also the world’s biggest Polynesian city and her work is much more modern.
It is influenced by the work of her mother and grandmother but also draws inspiration from the world of contemporary art and her own experiences as a half Tongan-half European woman, mother and artist.
Tui’s art is often overtly political. One piece, which was a finalist in the Walker & Hall art awards, is a royal portrait of her mother, an ordinary working class woman with her history painted into the designs of her clothing. Another shows Tonga’s late King George V surrounded by angels taking the souls of the victims of an infamous ferry sinking to heaven.
Tui is one of the most challenging and exciting practitioners of tapa art working in the medium and is blazing a trail that many artists are now beginning to follow.
She and Sulieti have also helped revive tapa art in Sulieti’s home village of Falevai in Tonga and their experiences there were captured in the short documentary Falevai Flava.'


Another stand out show was by Diana Harrison, she says:
'‘Traces in Cloth’, is showing fabric, patchwork and quilt produced by the marks left behind after layers of process have been applied. The stitching, dyeing, shrinking, bleaching, and printing combine to create pieces that reflect my individual ideas and aesthetic.
In these textiles I have recently used and manipulated found items, by unstitching previously sealed pillowcases or overdyeing and bleaching into handkerchiefs, I am working with the original measurements and cloth qualities, boundaries are given and this defines the outcome. The format and history is still evident but transformed.'

Other offerings which took my attention were the historic quilts, a group quilt by prisoners and this recycled clothing quilt. 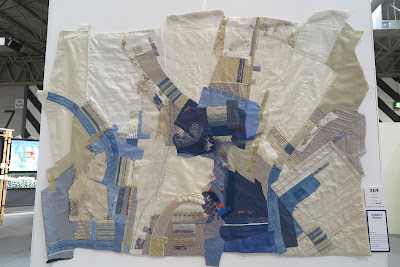 The Scottish Region of the EG host their annual summer school at Stirling university, and it has a reputation for selecting great tutors. I was pleased to have been asked to be one of four tutors this year and had been looking forward to getting there as my last engagement of this UK trip.
The weather continued to prove to be mixed ('driech' is the correct term I am assured), however the warm and energetic atmosphere created by enthusiastic stitching, painting, burning and chatting from all participants and the other tutors more than compensated. Our late night parties in the hall kitchens took me back to student years!
The other tutors were the amazing Amanda Clayton, Carol Naylor and Tracy Franklin. Here we are sheltering from the rain at Stirling Castle, enjoying 99's, as insisted upon by Mandi - naughty girl!

I oversaw two courses over the 5 days. Firstly ‘Personal Statements’, in which we explore the properties of metal fabrics and Lutradur in the context of simple patchwork and collage and favourite phrases.

And just like that, it was all over. Back on a plane (or two) to NZ.
Brian managed about a day before telling me to stop rearranging furniture (a regular habit on my return) and starting his countdown to my next UK sojourn (54 weeks apparently – not that he’s counting!).