On a brief trip across the Tasman to Canberra in May I was looked after splendidly by my very busy host, Cecile from Unique Stitching who was not only running a large stand, she was teaching full time throughout the show and organising the domestic and workshop arrangements for several tutors. I do hope that she got a good rest after the event before setting off on her next round of trips. (Though I doubt it)
I have previously posted images of the class samples for the Wild Wire Weaving and the ‘Not So Standard Angelina’ classes. Unfortunately I only managed to get a couple of images of the workshop results this time:


Interestingly, Cecile had sourced the fluorescent standard fibre, rather than the more subtle metallic standard fibres which I have used before. These went down especially well with the school girls who chose to take this option, going right to town with the bold colours.

It was also very lovely to spend time (not enough time) with Judy Coates Perez. Judy is a quilter and mixed media artist from Sacramento, USA.
Judy was great fun and we had loads to talk about. Hope we meet again Judy.


June saw the inaugural exhibition of the ‘immaterial’ textile group. Held at Minerva, the very special and very tempting, bookshop and gallery in Wellington, NZ.  We managed to time the opening to be on  the same weekend as the ‘Handmade 2014’ festival of art, craft and creativity, also held in Wellington and at which I was teaching.

Early July meant that it was time again to set off for the UK. As I write the UK trip is just over and I have to send thanks to lots of friends, family and fellow embroiderers who have all contributed to making the last few weeks such fun.
The weather was generally fabulous, warm and rarely wet - an extra bonus for a British summer.

I began the trip in early July at Norwich Embroiderers Guild, giving a talk about work I have made since my last visit a few years ago (probably about 10 years as I remember being introduced as ‘the Angelina Queen’!) followed by a day making ‘gamblers purse’ style bags with Angelina fibres. We did have a few sewing machines not wanting to tow the line, including one which set off all on it’s own each time it was plugged in!


After this I was ‘forced’ into 2 nights of camping. If friends you want to see are camping on the only dates you can see them, then you have to go with the flow. I survived (just) and nipped across to Art Van Go in Knebworth to set up my exhibition of new work. Bringing work with me on the plane necessitated some improvisation when it came to hanging the work. I wanted it to have a white background and to be seemingly floating. The solution was to paint packing card in white emulsion and stitch the pieces onto this. One snag was that the card curled inwards when painted. This threw odd shadows onto the pieces. By firmly pressing the card in the opposite direction from the back the card was straightened and all were much happier! More details and images in the next post.

The next weekend I visited Llanetllyd near to Dolgellau in Wales.   We worked with metals and sewing machines with a bit of wirework and wire crochet for light relief. Many thanks to Pat Bishop for being a fantastic host.


Whilst in the area I popped up to Menai Bridge to see old friends and had a minor car breakdown so didn’t stop at the Oyster Catcher at Rhosneigr  which would have been great as it is a chef academy in a Huf Haus, quite an addition for this small Anglesey village. Next time perhaps.

Wednesday saw me back almost on home turf in Chesterfield with the group ‘Inspireation’. We discussed ideas about how best to understand the types of exhibitions and exhibition spaces that are available, what suits their group and how to approach with professionalism. I am sure that there will be future discussions amongst themselves and I hope it helped. For a change of pace in the afternoon we played with image transfer media and altering photographs for stitching and collaging.

The next day it was back to Art Van Go at Knebworth and two days using the techniques from my ‘Beaches of North NZ’ series, this workshop is called ‘Textures and Memories’. During the 2 days we embellished/needle felted, we used image transfer techniques and we used soldering and burning techniques. The pieces shown are by no means finished, but are pretty well on their way. Well done all.

Time with Viv and Kev is always a treat despite their demanding schedule.
Saturday was spent with the Trent and Erewash Valley Embroiderers’ Guild, creating silk and fibre papers, adding textures with stitch and other fabrics then using reactive metal paints and gilt wax.


Sunday was a design and concept day for the East Midlands Region of the Embroiserers’ Guild delivering a workshop for the Kickstart programme. Called ‘Layers of Meaning’ and subtitled ‘The Role of Colour and Symbolism’, this can be a pretty demanding day, the process being to link colour and symbols related to a subject and beginning to develop ideas which broaden the scope of investigation before beginning a piece. Delving a little deeper into the possibilities of the subject of Kickstart, which this year is ‘Nursery Rhymes and Fairy Tales’.

In 2013 I ran a couple of days investigating ways to abstract designs from the original inspiration. The theme of 2013 was ‘Flowers’, and though I wasn’t able to get to the final display, I was sent a few pictures of the results and was pleased to see that in some of the pieces there seemed to be at least a modicum of relation to the ideas we worked with. 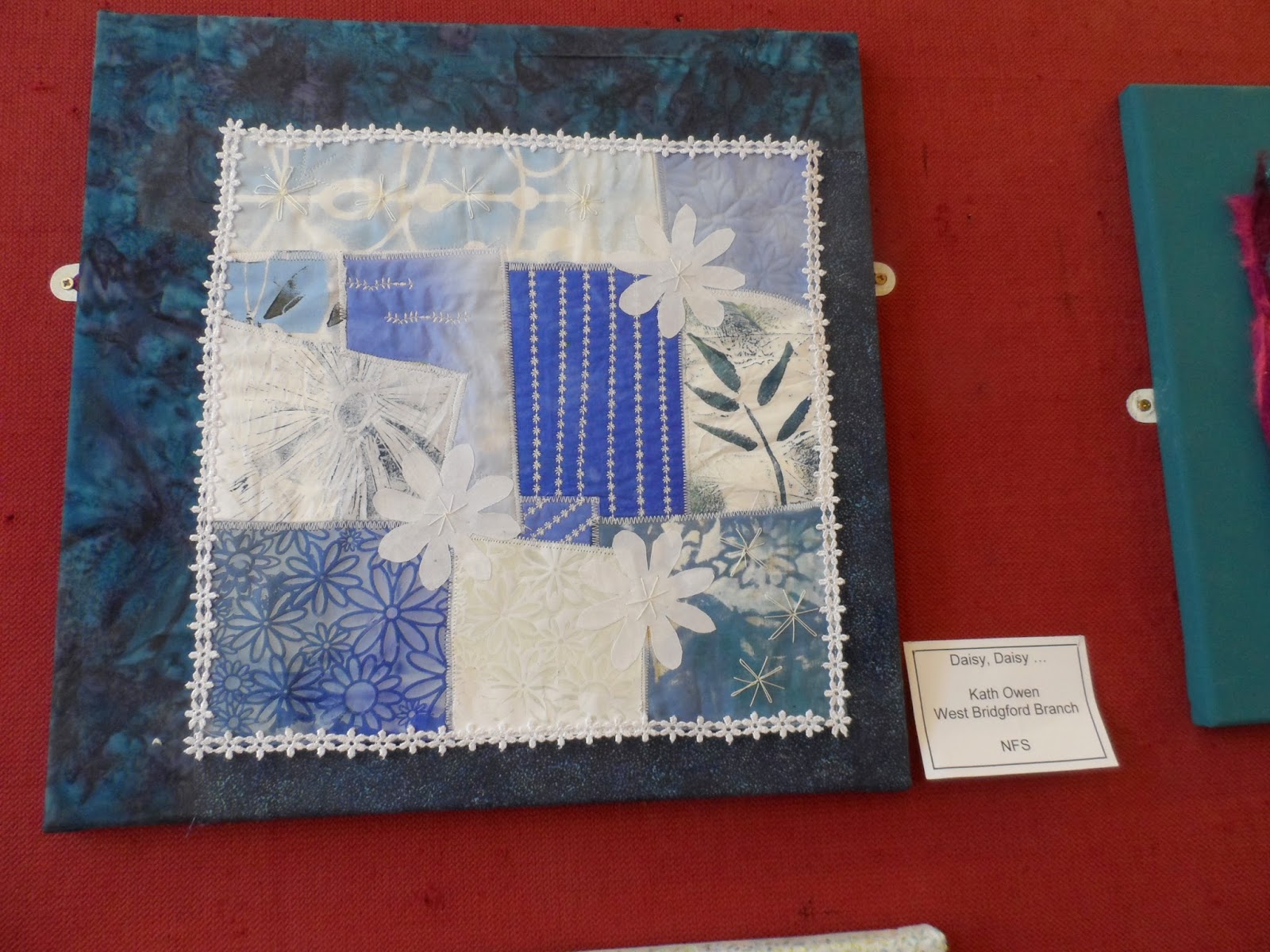 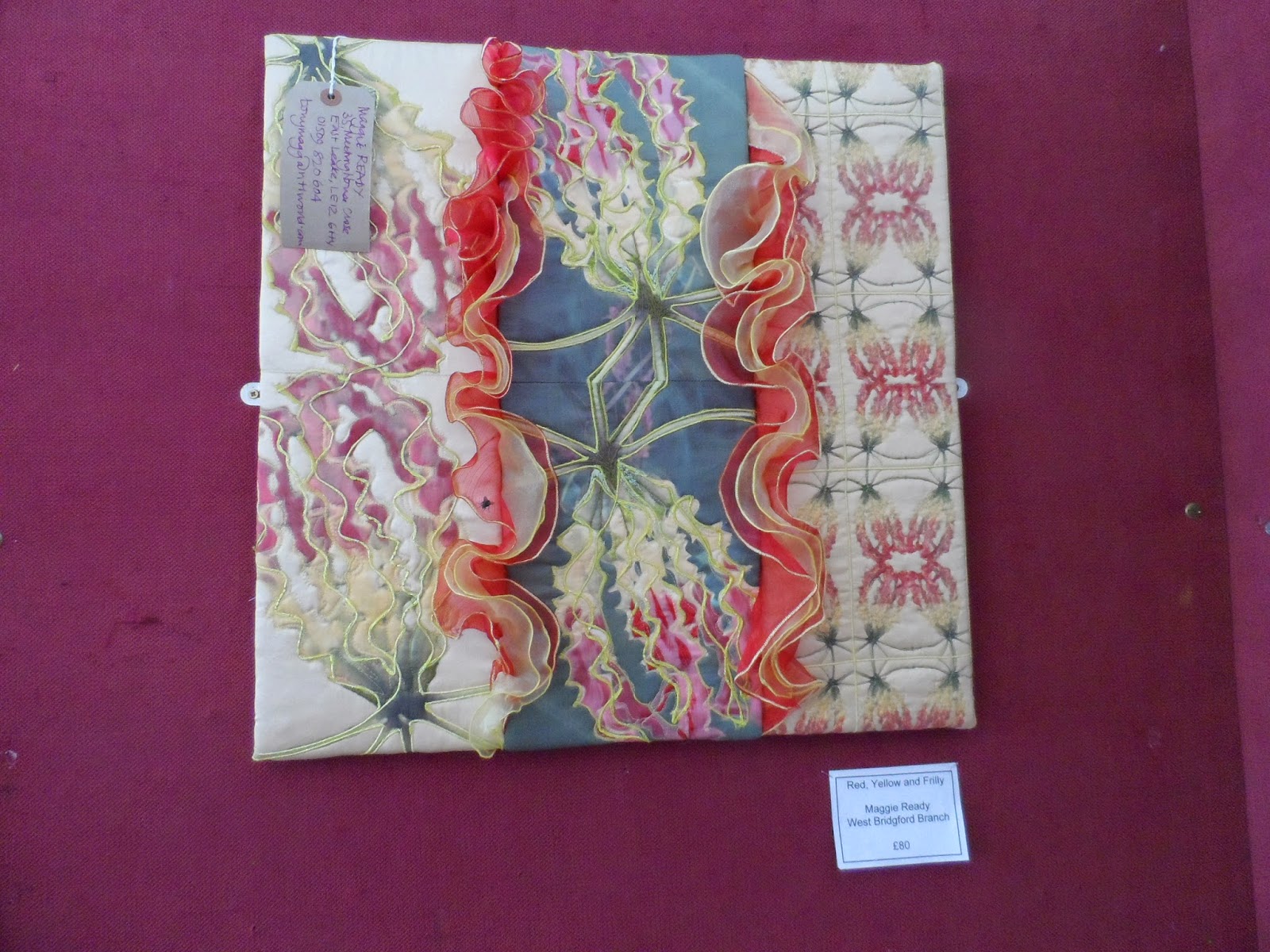 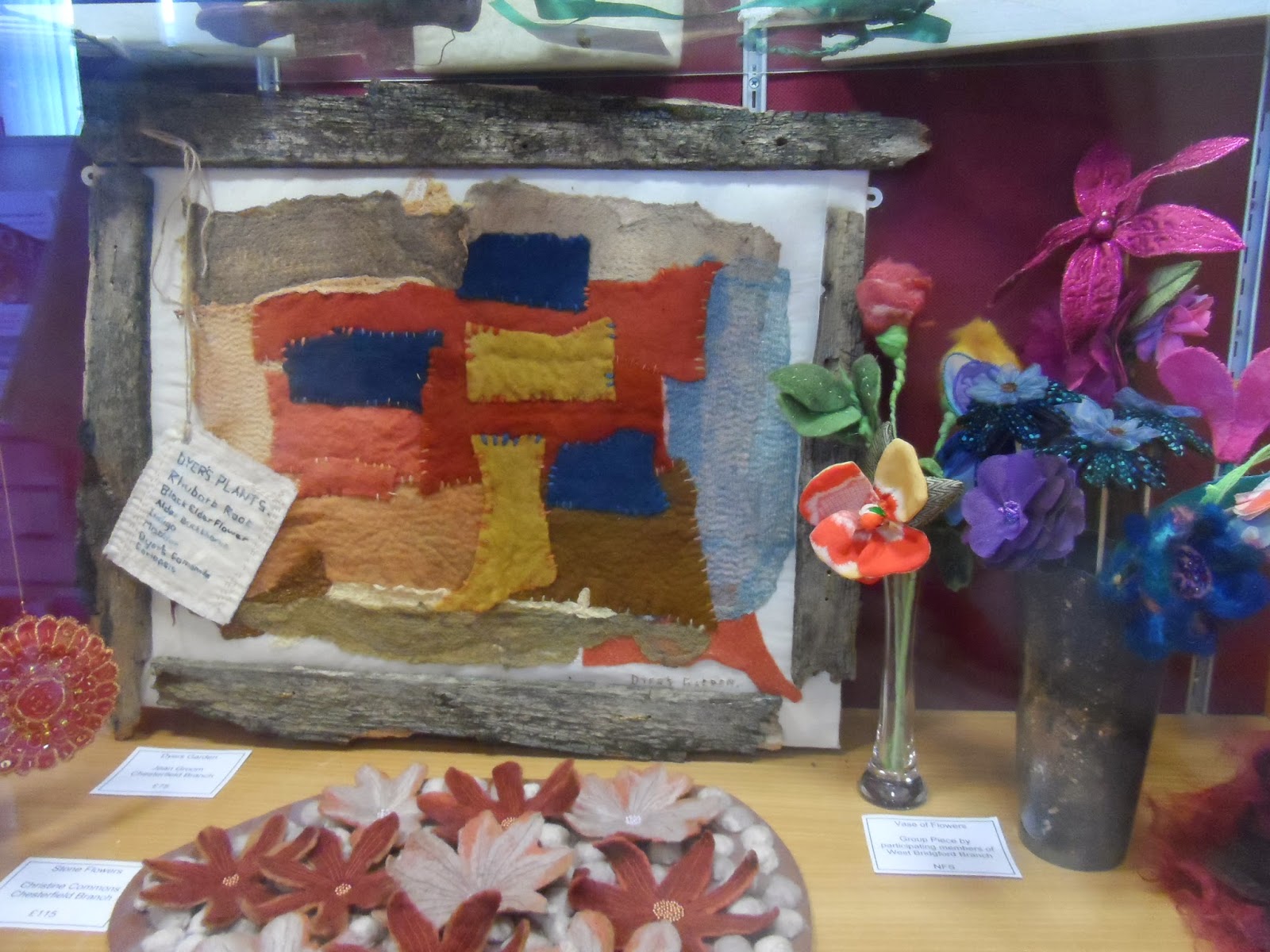 The next week was spent with participants of the Living Threads group, we covered some of the projects from ‘Stitch, Fibre, Metal and Mixed Media’, including  Hanging Pods, Fernery Vessel, Silvered Bark and Golden Romance.I will be running more workshops for Living Threads in October and November the details should be on their site very soon.
I forgot my camera on the Hanging Pods day, sorry, but here are the others, as far as we got on the days. If anyone finishes their work and can send me a picture, I'll not only appreciate it personally, but would love to show it here ...

After over three weeks I managed to use the indoor climbing wall and catch up with friends there. By now I was terribly out of shape and really must get out running again. This isn’t helped by living with my parents, who like regular and well made meals. This is in direct opposition to my usual varied and perfunctory cooking – I always seem to have better things to do.

The next week was to be the Festival of Quilts at the NEC in Birmingham. This meant a concerted effort to create work to show on the stand, make 100 workshop packs, create the staged samples for filming on Saturday morning, a book launch (The Ultimate Guide to Art Quilting by Linda Seward) in which I have stainless steel quilt featured, and most nerve wracking of all, walking on the catwalk on Friday evening at the Wearable Art Fashion Show, modelling the corset I made with sweet paper foils for the book. Thanks so much to June who also overcame nerves to show off the wedding dress I made for her. When the filming of the project and the fashion show are posted somewhere I will link it to here – I can’t wait to see what it all looked like from the watchers point of view!

This only left one day to sort everything out, fill my mum’s garage with clothes, equipment art supplies, books etc. which I can’t fit in my suitcase and then back on a plane again.


Can’t believe I am already back in NZ. But the NorthShore Embroiderers are expecting me today and tomorrow, my regular workshops at Mairangi Art Centre start again next week, the exhibition at NorthArt has to be finalised, sculptures to create for the 2015 Kaipara Sculpture Garden trail, more workshops in Australia and a family who might just want some attention, before setting off back to the UK again in late October.

Of course no visit is completely full of happy times and during this visit there were two particularly emotional situations.
One was dealing with assisting the owner of the Beetroot Tree to complete the process of closing the gallery down. He had not found it possible to continue in business, so it was time to move on. There is much clearing, sorting, selling and paperwork to be done which I was only able to scratch the surface of with him. Hopefully I was of some use.
The second and even sadder occasion was the death of my Grandad. He was a very frail old man already, and was rushed into hospital, he died peacefully after a couple of days, without spending too long holding on to the last stage of life when he was no longer able to see, hear, communicate or move for himself. My Mum has been a carer for all of her parents, her parents-in-law and a couple of aunts and aunts-in-law, one after another for so many years. She is tired and sad at the moment but now will have a chance to find time to spend on her own interests and with my Dad. As I couldn't stay for the funeral, here are a few pictures of Nana and Grandad Bales through the ages. 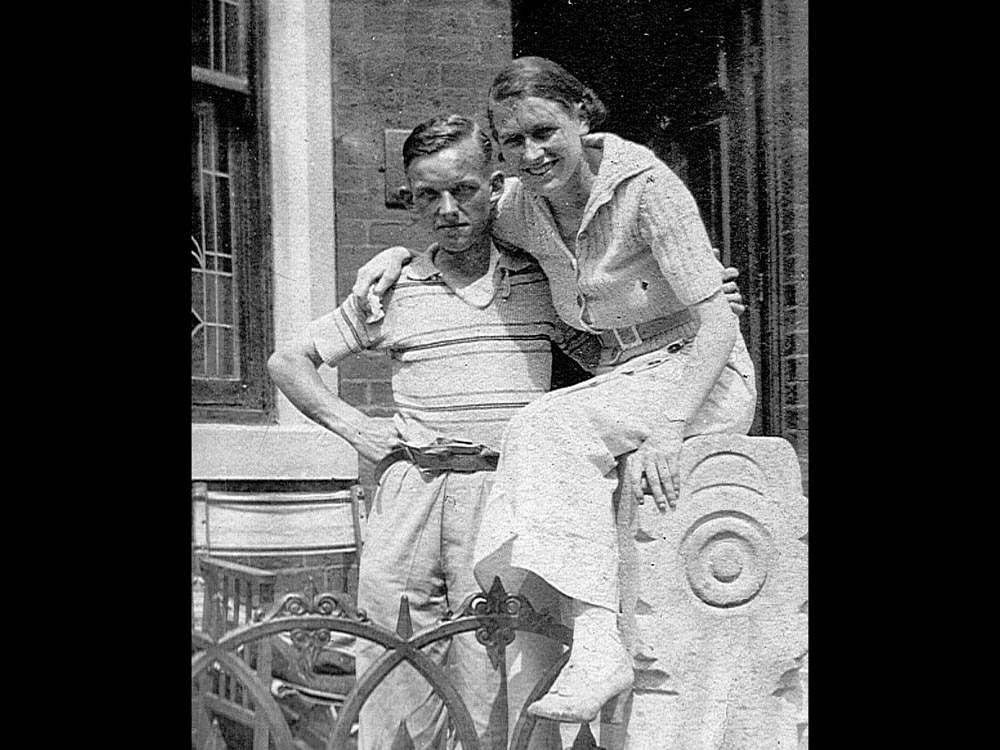 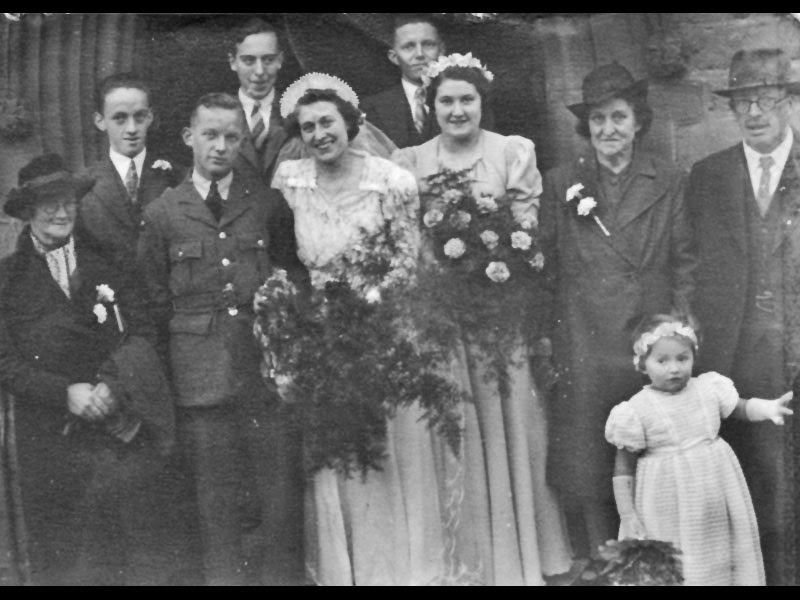 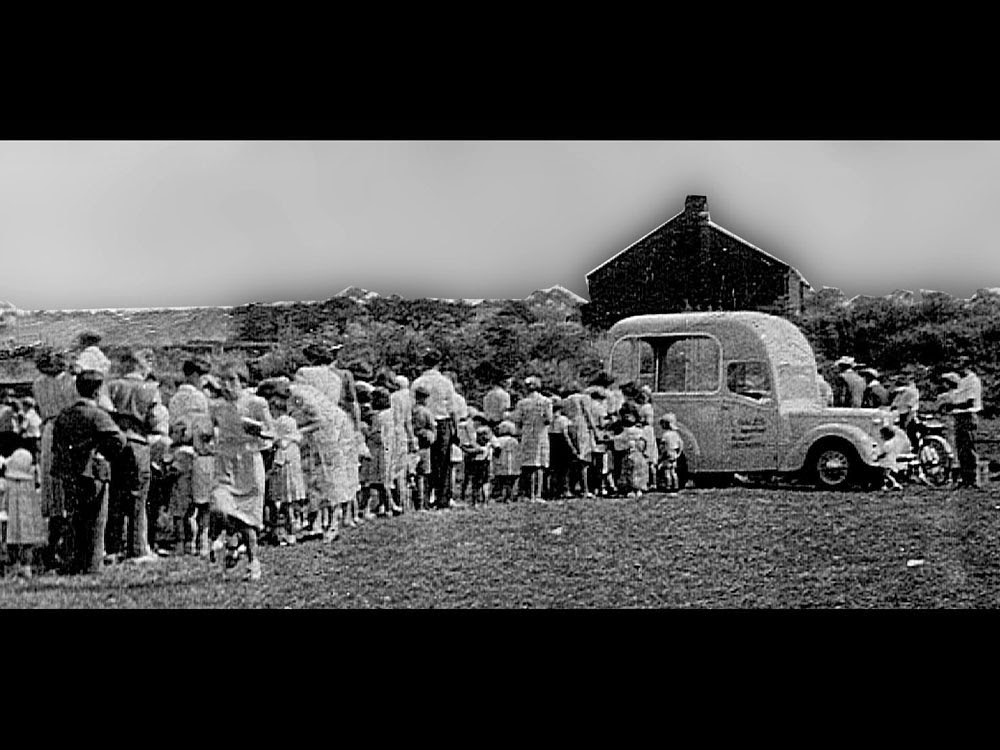 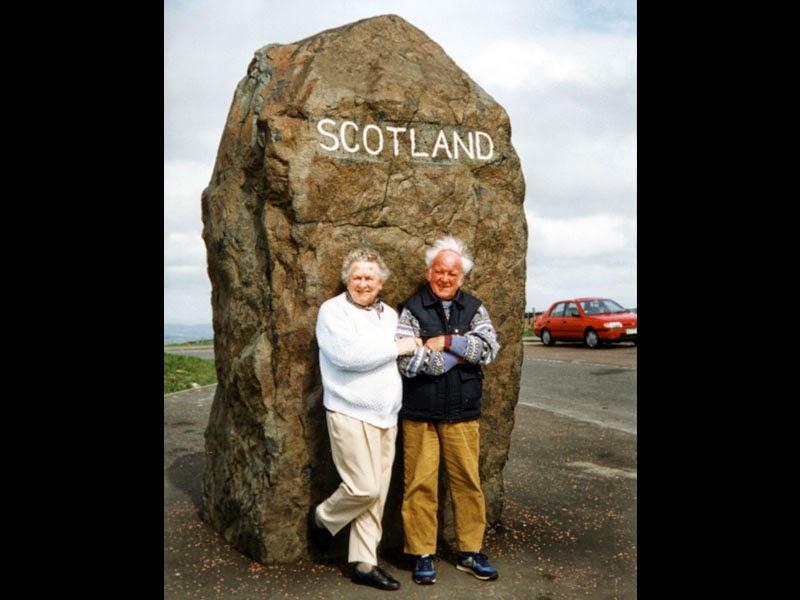 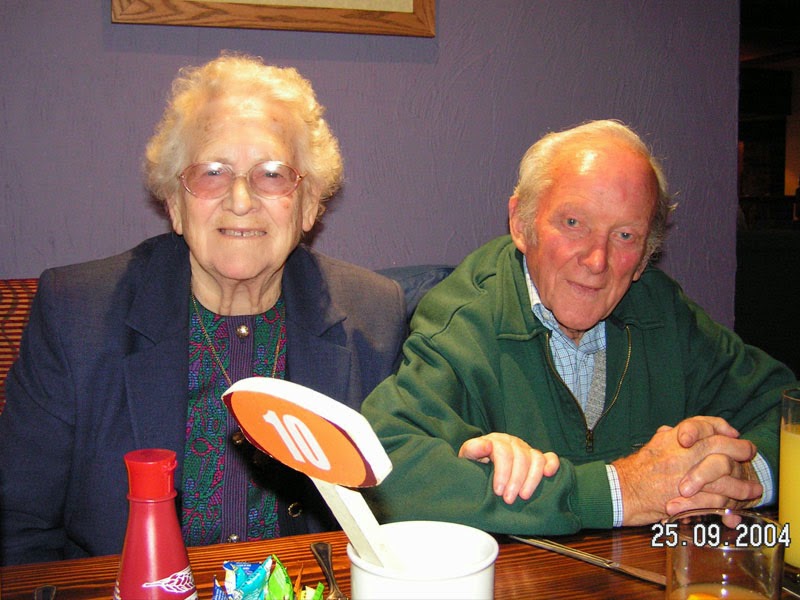 There, I hope that I haven’t bored you too much, trying to pack four months into a few words and pictures. I’ll be back sooner next time.
Posted by Alysn Midgelow-Marsden at 15:04

Lovely to catch up with you at FOQ. This is a positive feast of inspiration. Sounds like you are not going to get any chance for R&R now that you're back.