This morning's walk was a bit of a classic -though we live in the 'almost countryside', the fields and the river change constantly so that each new week has a new character. This morning was a dry, warm one after a changeable (that usually means wet) weekend and it had brought out swarms of damselflies. Also, the poppies in the fields are looking spectacular. There is something about their wonderful scarlet colour, the fragility of paperthin petals contrasting with the strength and structure of the flowers' centre which has me clicking away with my camera, making drawings and has in the past had me painting and stitching. They are for so many artists a perennial (haha - pun absolutely intentional) inspiration.


The dogs managed to scare a few pheasants which seem to be common right now and I caught a glimpse of the kingfisher -always such a treat, and never when you have a camera ready!
Because the river was looking good, the boys had a swim:

So much for the joys of dog walking, it was also my husbands birthday this weekend, and he elected for a trip to the Yorkshire Sculpture Park.

We found an installation by Alec Finlay, an artist who had been at the Beetroot Tree during our 'Lines in the Land' exhibition. This piece was tucked away in an unassuming greenhouse and was a series of  mesostic poems which consist of a 'name stem' and 'word branches'. The branches giving a lovely sense of the character or history or perception of the 'name' (all plants in this case), see here a couple of examples.


The major exhibition on there at the moment had my 13 year old saying she was 'gobsmacked'! The artist is Jaume Plensa. This is what they say about him and the exhibition:

YSP presents an extraordinary body of new and recent work by renowned Spanish artist Jaume Plensa. Encouraging tactile and sensory exploration, this vibrant exhibition includes a 50-metre curtain of poetry made of suspended steel letters, large illuminated sculptures in the landscape, and engraved gongs that visitors can strike to fill the gallery with sound.


Plensa’s sculpture gives physical form to the intangible, using the body as a way of exploring what it means to be human and engaging with universal themes: love, memory, language and despair. Other works need the presence of a human body to make them complete, such as Song of Songs. These glass cabins, immersed in coloured light, are only large enough for one visitor to enter and are spaces for solitary contemplation.

Plensa has an international reputation and has completed significant public art projects around the world, including the momentous Crown Fountain (2004) in Chicago. In 2009 he created Dream, a 20-metre high sculpture for St Helens as part of Channel 4’s Big Art Project.

2011 will also see Plensa’s first public art project in New York City. Echo will be presented from 5 May – 14 August 2011 by the Madison Square Park Conservancy. In the UK, Chichester Cathedral recently announced Plensa’s winning proposal for the Hussey Memorial Commission, Together, expected to be unveiled in the Cathedral in 2012.

The work will be at the park until 25th September, I fully intend to drag my sister to see it when she visits from the States later this month (You have been warned little sister!)
My personal 'wow factor' pieces were the 'heads': 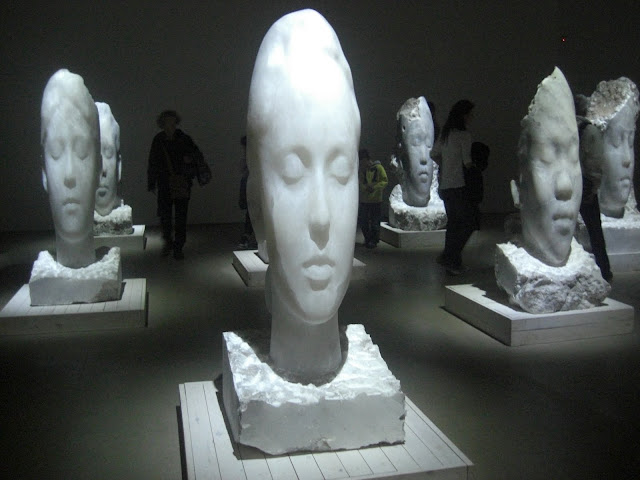 It was a feeling of ancient-ness (!), calm, meditation, spirituality ...
The quality of the pieces was stupendous, the use of the raw alabaster surfaces contrasting the translucent faces.
I wanted there to have been a projection over it also.
His pieces were involving, playful, thoughtful and sensuous - I will stop there as I am no wordsmith, but do get to see it if you can - images don't create the atmosphere of being with the work.